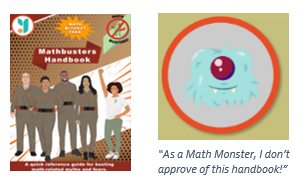 There are countless ways (no pun intended) to help students experience math as something interesting and useful instead of boring and irrelevant. And it doesn’t always require elaborate planning. You can use what you already know to create Mathbuster Moments “on the fly” to bust through students’ dislike or fear of math. How? By watching for ways to bring fun math experiences into whatever’s happening in your program right now. Here are some ideas:

Here’s an example that involves number lines, a concept that students learn and apply to different situations in math classes (and everyday life), beginning as early as third grade.

Crash course on number lines: A “real number” is any number that can be plotted on a number line. It can be a whole number or a fraction, and either positive or negative (or zero). Every real number can be associated with its own point on the number line. Here’s what a number line looks like:

What you already know: You use number lines every day, but you might not call them that. Examples are rulers, tape measures, some bathroom scales, thermometers, barometers, and measuring cups. Many measuring tools use the “number line” concept, especially if they don’t have a digital display. Number lines don’t have to be horizontal. For example, the number line on a measuring cup is vertical — and the measurement marks show only the positive numbers, not the negative numbers. The bottom of the cup is the “zero” on this number line.

What you can do: Explain the concept of “number lines” the next time you use a measuring device during an activity, like:

Make it relevant: If a student says, “Our family’s going on a road trip,” blow their minds with this travel trivia:

You can probably think of other math skills and concepts you know about and can share with students, like comparison shopping, estimating how far you’ll go if you take 10 big steps, measuring the dimensions of a room, and recognizing patterns in art and nature. Download the Y4Y Mathbusters Handbook for more ideas. Then challenge yourself to create a Mathbuster Moment this week. You might just surprise yourself!

We've logged you out to keep your information safe. Don't worry, if you were in the middle of a course, we've saved your work. To start working again, just log back in.

We have detected that cookies are not enabled on your browser. You must have cookies enabled to avoid receiving this message on every Y4Y portal page.

You are accessing a U.S. Federal Government computer system intended to be solely accessed by individual users expressly authorized to access the system by the U.S. Department of Education. Usage may be monitored, recorded, and/or subject to audit. For security purposes and in order to ensure that the system remains available to all expressly authorized users, the U.S. Department of Education monitors the system to identify unauthorized users. Anyone using this system expressly consents to such monitoring and recording. Unauthorized use of this information system is prohibited and subject to criminal and civil penalties. Except as expressly authorized by the U.S. Department of Education, unauthorized attempts to access, obtain, upload, modify, change, and/or delete information on this system are strictly prohibited and are subject to criminal prosecution under 18 U.S.C § 1030, and other applicable statutes, which may result in fines and imprisonment. For purposes of this system, unauthorized access includes, but is not limited to:

You need to be logged in to the You for Youth (Y4Y) portal in order to save course progress and receive certificates of completion.